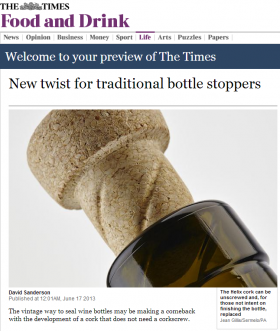 The vintage way to seal wine bottles may be making a comeback with the development of a cork that does not need a corkscrew.

Cork, taken from the bark of a species of oak, was long the only material used by the wine trade, but when it began to be blamed for “cork taint”, winemakers looked for alternatives.

Plastic stoppers were developed but the screw top, which was adopted by New World vineyards then many others except the most exclusive, became the most popular choice. There is no taint and, if need be, a bottle can easily be resealed.