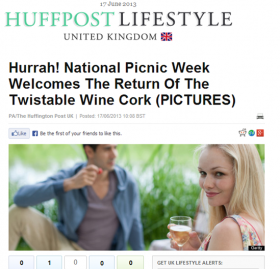 We've all been there. Sat on a picnic blanket, sun shining, friends by your side, food at the ready and a few bottles of wine waiting to be glugged.

And then the realisation hits -- you've forgotten the corkscrew and, just like that, your dream of a long (and slightly boozy) picnic has vanished.
Luckily it looks like the corkscrew's days are numbered, with the much-loved original twistable and re-sealable wine cork set to return.

It will be unveiled at the International VinExpo wine fair in Bordeaux on Monday, and its makers say it could be on shop shelves in Europe within the next 24 months.

The design is the result of a four-year collaboration between Portuguese cork manufacturer Amorim and US bottle maker O-I, who are aiming it at the £5 to £10 "popular premium" market.
It follows research that found an "overwhelming preference" among consumers for the cork and glass bottle combination.

Mr Bouts said: "For centuries, cork and glass has been a winning combination in the wine market, yet it is only through this partnership that we have been able to create such a major innovation in the industry.

"Cork is still by far the preferred stopper. Our research has found that at least 80% of consumers prefer the cork and glass combination for their wine.

"It has the highest-quality image in the market and now we have made it easier to use. And it is still the most sustainable option."

Mr Bouts said the cork also had the potential to be used for other forms of alcohol, including spirits.