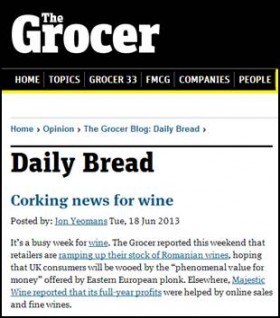 It’s a busy week for wine. The Grocer reported this weekend that retailers are ramping up their stock of Romanian wines, hoping that UK consumers will be wooed by the “phenomenal value for money” offered by Eastern European plonk. Elsewhere, Majestic Wine reported that its full-year profits were helped by online sales and fine wines.

Meanwhile, industry leaders, connoisseurs and quaffers of all kinds have descended on Bordeaux for the biennial Vinexpo show, to sample the latest the business has to offer.

One innovation on display at Vinexpo that has captured some headlines is Helix – a resealable cork you can twist off and on. The stopper comes with a thread finish that matches the thread inside a specially designed wine bottle. The companies behind the system – Portuguese cork manufacturer Amorim and US-based glass maker I-O – claim that Helix bottles with the resealable stopper suffer no alteration in taste, colour or aroma.

“We are delighted to offer the market not only a 100% renewable, modern product, but also a solution that enhances the wine drinking experience through opening and resealing convenience,” says Amorim chairman and CEO, Antonio Amorim.

Helix (which was four years in the making) could be the cork industry’s definitive answer to the screw-top bottle, which has long divided industry and consumers alike. Fans of the screw-top, of course, claim it is not only convenient, but keeps the wine in better condition. Critics say screw-top bottles suffer a damaging perception problem – they’re not posh enough to take to a dinner party, in other words.

From the looks of it, Helix could be on to a winner – preserving that satisfying pop when you crack open a bottle, without the embarrassing, red-faced sweaty cursing that ensues when a cork doesn’t play ball. Where it may struggle is in convincing the entire wine industry to convert its bottles to a Helix-compatible thread.

Nonetheless, it certainly looks like an easier sell than another innovation on display at Vinexpo this week – wine in a can, from French company Winestar. While canned wine is not new, the firm hopes to be the first to bring premium French wine in a can to the French market. I don’t fancy their chances somehow, but I’ll raise a glass of Romanian white to their enterprise, nonetheless.