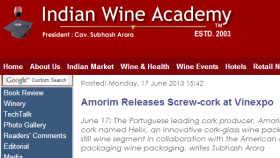 In a telephonic call from Vinexpo where the launch would be officially announced at a Press Conference later today at 2:30 pm local time in Bordeaux , Carlos de Jesus, Communications Manager of the multi-billion cork company informed delWine that this innovation was the result of a four-year partnership between Amorim and O-I.
During a visit to the manufacturing operations Pan Portugal, I had met several people including the R & D from where I could sniff that such a cork was in the offing. The attempt would be to snatch some of the share from the Screwcap market which is growing unabatedly. At least, it would impact those consumers who do not have the cork opener and those who like to have a feel of the cork while opening the bottle.
During my meeting with Carlos in Bratislava last month where we were the co-judges for the Concours Mondial de Bruxelles, he confirmed to me that the cork would be released in Vinexpo on Jun 17, at a Press Conference at 2:30 pm. He also promised me that I would be the first to know. Well, he tried to keep his promise, but for the leak - there was an article in BBC a few hours ago, taking some of the sheen out of the Press Conference.
The concept of the cork is simple enough. The ‘twist to open’ concept combines an ergonomically-designed stopper made from cork and a glass bottle with an internal thread finish in the neck, creating a high performing and sophisticated wine packaging solution. HELIX combines all the benefits of cork and glass – quality, sustainability and premium image with user-friendly, re-sealable convenience. It can be quickly and easily implemented by wineries with only a minor adjustment to the existing filling lines, according to the PR.
O-I European President Erik Bouts says ,“Helix is a proven example of what can be achieved for consumers and the wine trade when the world’s leading companies in glass packaging and cork work together.”
Antonio Amorim, Chairman and CEO of Amorim says, “HELIX meets consumers’ growing desire for sustainability and quality, while delivering the brand building and premium image packaging wineries rely upon. We are delighted to offer the market not only a 100% renewable, modern product, but also a solution that enhances the wine drinking experience through opening and resealing convenience.”
Aplogising for not being completely forthright about the product, Carlos also added that they had been experimenting with different wineries for consistency of results and didn’t want to make the announcement or have anyone jumping the gun. ‘We have been doing extensive research in UK, US, France and China’, he told delWine.
‘You will be glad to know that these new cork stoppers showed no alteration in terms of taste, aroma or colour,’ he remarked adding that consumers have appreciated retaining the festive ‘pop’ associated with opening a bottle of wine.
Amorim is a public limited company with its shares listed in Europe and is the world’s largest manufacturer of cork stoppers. It is based in Portugal, the largest cork oak forest area in the world . It supplies cork stoppers to more than 15,000 customers across 82 countries, including India where the main buyers are the liquor manufacturers.
Technological innovation has steadily improved the performance of cork stoppers in recent years, prompting increasing numbers of wine producers to choose cork in preference to other closures. By the companies' own admission, the cork taint has been brought down to less than 1% as compared to the figure of an outrageous 10% two decades ago. Well-known UK Journalist and critic Tim Atkin still claims that there is around 5% cork taint in the market. This seems to be a not-too-generous estimate; at the Concours Mondial de Bruxelles where over 90% of the wines are cork sealed. The percentage of ‘second bottles’ was less than 1.5% this year and while we are working on statistical records from Bruxelles and International Wine Challenge who have promised to release them in November, the cork taint is expected to be around 1%-in line with the company estimates which vary from .5-1%.
The current launch may not reduce the cork taint but will certainly add to the market share which saw a growth of about 10% last year.